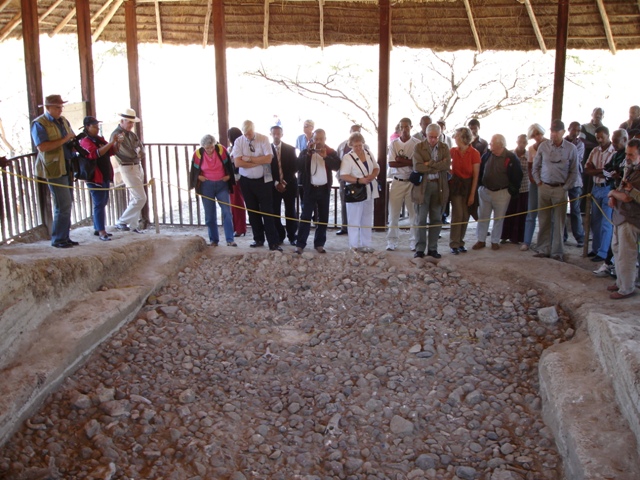 Awash Malka Kunture is Situated 50km South West of Finfinne on the Buta jira road. It is near to a small town of Awash, which is famous for its paleontological implication.  One can find after crossing the Awash river a fenced enclosure where the excavations and collections of prehistoric physical remains are kept for visiting. The main excavation in the site include fossilized animal bones and Stone Age pebble tools of ancient humans (estimated at about 2 million years old) which are exhibited in various mini museums.

Beside the site of these excavations are megalithic monuments, which are structures of large roughly dressed stones erected as sepulchral monuments or as memorials of notable events in very early days.  Found in all parts of the world, most of megalithic tombstone around the world date back to prehistoric period. Some of the identified megalithic sites are Armuffo sole & Armuffo Dildila standing stone, Bila standing stone, and Tiya standing stone of SNNP. Most of the megalithic tombstones in Oromia depict Islamic & Christian inscriptions and are widely seen  in South West Shawa, Arsi and West Arsi zones of Oromia.

The other pre-historic features tend to be Paleolithic Art.  Oromia is endowed with many types of ancient cave arts and rock paintings or rock carvings. Generally speaking, Paleolithic Art means rock/cave paintings produced from about 32,000 to 11,000 years ago or during the Stone Age.  It falls into two main categories: portable pieces, such as small figurines or decorated objects, and cave art. A possible third category comprises pictures and symbols engraved on rock surfaces in the open air, but very little of this art has survived. No matter how ancient and authentic as heritage, 110 examples of cave art have been identified in various part of Oromia that require further authenticity study. The occurrence of these relics is mainly in the Hararghe zones.